I felt like making some unique and fall-like today.  The weather was dreery and my brain was too "fuzzified" to consider attempting to do all of the studying I had originally planned.  I've hit that point in the semester where I start to get really annoyed.  The holidays are coming, visits home and family vacations are approaching, marathon training is picking up, the weather is still bearable. . .  My mind floats around to everything BUT school work.  *Sigh*

Butternut squash, pumpkin, sweet potatoes, apples - all of those things remind me of fall.  Yesterday, I picked up a 1 lb. package of pre-cubed butternut squash.  I am a huge fan of buying pre-cut vegetables.  It may be more expensive, but clumsy people should not use knives. 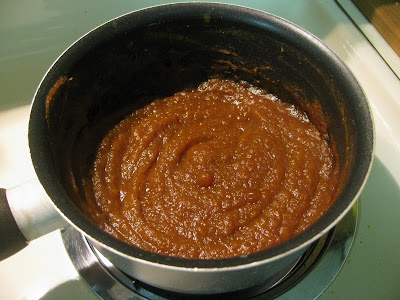 This morning, I prepared some pumpkin butter to have with toast and bagels.  It is excellent!  I ate it in place of peanut butter on my daily graham cracker snack.  It tastes like pumpkin pie!  Very, very good.

Directions:
1.  Combine ingredients in a pot.
2.  Simmer until most of the liquid has evaporated.

Then, I settled on this recipe for Butternut Squash, Sweet Potato and Pomegranate Soup.  I was kind of intimidated, but figured, what the heck! 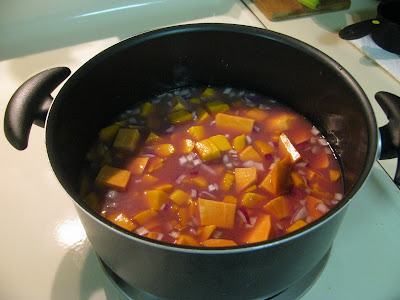 While the soup was simmering, I made up some cinnamon croutons to have with the soup.  I recall seeing this tip on a Food Network show one day:  Cut 3 slices of bread into cubes.  Lightly spray with cooking oil.  Toss with cinnamon and brown sugar (measure to your preference) and bake in oven around 350 degrees.  Toss every 5 minutes or so until bread begins to brown. 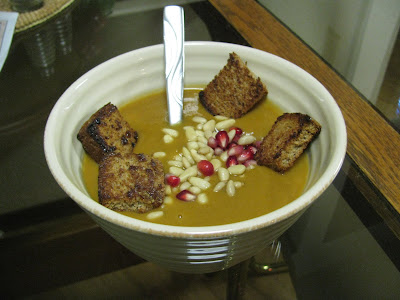 I don't know.  Something about the end result didn't make me a happy cook or a happy diner.  I guess I am used to eating soup that has chewable items (i.e. vegetables, chicken, noodles, etc.) included so I kept dumping stuff in here to chew.  I must not be a fan of the whole 'puree' thing.  The soup itself was . . . interesting.  It was a blend of sweet and spicy, but I could never really tell what I was going to get.  Truthfully, I doubt that I will make this again.  Interesting concept, but I just wasn't a fan.

Nonetheless, I will not chalk this day up as a loss.

Directions
1)  Score 1 fresh pomegranate and place in a bowl of water. Break open the pomegranate underwater to free the arils (seed sacs). The arils will sink to the bottom of the bowl and the membrane will float to the top.  Sieve and put the arils in a separate bowl.  Reserve 1/2 cup of the arils from fruit and set aside. (Refrigerate or freeze remaining arils for another use.).
2)  In a stockpot, add butternut squash, sweet potato, onion, green chiles, chicken broth and pomegranate juice.
3)  Bring to a boil.  Lower heat to a medium low and cook for 30 minutes or until squash can be easily smashed against the side of the pot with a spoon.
4)  Add salt, pepper and sherry or white wine.
5)  Remove from the heat and cool slightly.
6)  Process soup in a food processor or blender until smooth.
7)  Return soup to the stockpot, add 1 cup of milk (or more if mixture is too thick) and reheat.
8)  Serve in bowls with crisp corn chips, creme fraiche, pomegranate arils and toasted pumpkin seeds.