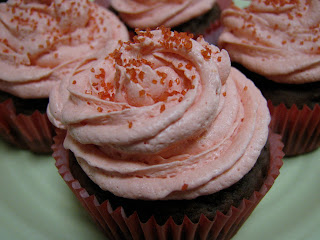 Well, these aren't supposed to be mud-colored cupcakes.  However, I somehow misread my handwriting and did not add enough red food coloring.  Oopsy.  Now, you'd think that I might've decided to add more food coloring once I realized the color wasn't correct while I was mixing it in the bowl.  Of course, this thought did not occur to me until after they were in the oven.  I've been working on an outline all morning and it gave me a headache.  Blame law school for lack of concentration (because law school must always be blamed).

Anyway.  Who said dessert has to be terrible for your waistline?  Granted, the best desserts tend to have that effect, but it is absolutely possible to mix up something that tastes good and doesn't pack on the pounds.

These cupcakes are a perfect example!  I found them from a Weight Watchers blog and they sounded promising because I had worked with the ingredients in the past.  I made some slight adaptions and made them even better.  Now, I can eat all 6 and it would still be less than your standard red velvet cupcake!  (I probably won't, but it's nice to know that I can.)  With my changes, the caloric intake for one of these cupcakes is, wait for it, a mere 105 calories!

It is Valentine's Day, so these cupcakes seemed entirely appropriate.  My original plan was to make a dark chocolate base with a peanut butter middle and mixed chocolate ganache and peanut butter frosting.  But, I will save those for another time.  :)

I only made 1/4 of the Red Velvet cupcake recipe to yield 6 cupcakes.  It took a little bit of time to cut down the measurements, but it worked.  I had a lot of strange measurements but it was manageable.  Cutting an egg in half can be tricky, but it can be done.  To do this:  Crack the egg into a measuring cup with markings.  Use a fork to lightly beat the egg and mix egg whites/yolks evenly.  Determine how much egg you have and pour half of that into the bowl.  Or, you can use an egg substitute to make it easier.  (Some people have problems with egg substitute.  I don't.)   For reference, 1/4 cup of egg substitute = 1 whole egg.  2 egg whites = 1 whole egg.

Another tip (I need to learn how to heed my own advice):  When cutting recipes in half, cross out the old measurements and sub in the new measurements in a big red pen!  Otherwise, you may get all the way done with the prep when you realize that you messed up (hence the mud-colored cupcakes)!  This could be a no-brainer, but trust me, I am speaking from many terrible experiences...  At least this one only resulted in a coloring mishap.

These cupcakes were very good and I could not tell that they were a "skinny" version.  Like I said, I made 1/4 of the recipe, but I've included the full recipe here and reflected the few changes that I made in red.  If you need something sweet and you want to satisfy a cupcake craving, try these out!  They really are pretty damn good! 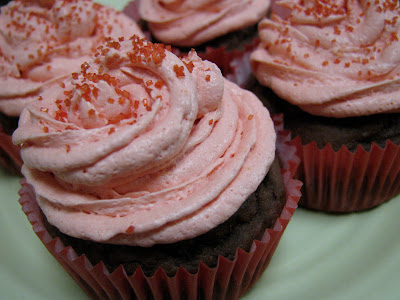 Skinny Red Velvet Cupcakes
adapted from Gina's WW Recipes
Yield:  26 cupcakes
Nutrition:  With my changes, caloric intake is about 105 calories.  (No, I am not lying.  An entire cupcake for 105 calories & a small amount of fat/sugar.)  Original recipe resulted in about 141 calories.
Ingredients
Low Fat Cream Cheese Frosting