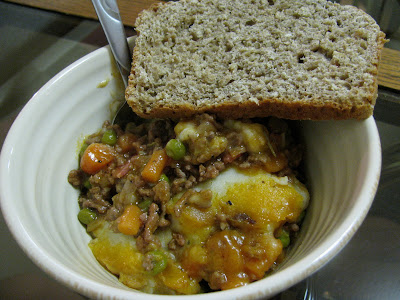 We had an Irish meal for St. Patty's Day.  A shepherd's pie w/ some brown soda bread.  Ron had some Irish Ale as a side and followed up with a green shamrock whoopie pie.  It was a nice, relaxing evening and a lovely end to a beautiful, sunny day (nevermind the fact that we're both sick).  However, preparation for this meal was pretty time-consuming! So, it is certainly something to enjoy when you have a longer period of time to cook.  I'm in a week where I an afford (who am I kidding?) to spare some longer hours in the kitchen.  I've prepped for most of my classes for the next week and I'm about to dive into 3 straight weeks of pure hell.  So, I deserved it :)  Anyway, the bread took about 1.5 hours.  The cookies took about 2 hours (from start to finish).  And this pie?  Well, it was very involved.  I actually decided to make the potatoes the night earlier (~35 minutes) to cut some of the time in half. But, the prep work for the meat part of the meal took a full hour and then some!

Granted, there was some down time in between the steps, but it is certainly not a quick weeknight meal!  The recipe was very easy to make.  I ended up baking the pie in a 8 inch baking dish.  I didn't have a 10 inch baking dish and this recipe makes a ton!  I had no idea what size to use.  I ended up leaving about a 3/4 cup of mashed potatoes out because I didn't think I could pack any more in the dish.  I used very large potatoes, so maybe I used bigger potatoes.  This is why I prefer recipes that give measurements in weight/volume/ounces/etc.  It's easier to make the recipe as perfect as the original chef!  The baking dish worked ok, but it still managed to overflow onto the bottom of the oven.
The St. Patty's Day meal was generally a success.  Even though the shepherd's pie isn't completely irish (I guess traditional shepherd's pies use lamb.  But, EEK!  Lamb?  No thanks!) the meal was still incredible and a fun way to celebrate Ron's Irish roots.  Plus, it was my first attempt to make mashed potatoes.  They turned out awesome.  They were so quick and easy.  And, I plan to make them often.  The bread recipe is lighter than your traditional bread, but it is a super healthy version.  It does not skimp on flavor by any means.  Ron loved it and that's saying something if it's a lighter/healthy version.  I love Irish oats, so this bread will be made in this household often.  I recommend spreading with apple butter for a delicious breakfast.


I couldn't get a really good picture of the Shepherd's pie when it was cut open.  It actually looked really greasy, so I decided it was best not to post an unappetizing photo.  Even though the pie was good, I doubt I'll be making it again.  It took way too long for the taste.  It was really thick and I'm not such a fan of red meat and bacon.  But, that's just my personal preference.
Shepherd's Pie
adapted from Food Network (Melissa d'Arabian)
Yield:  6 -8 servings
Ingredients
Preparation 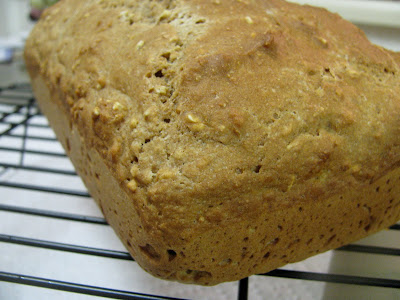