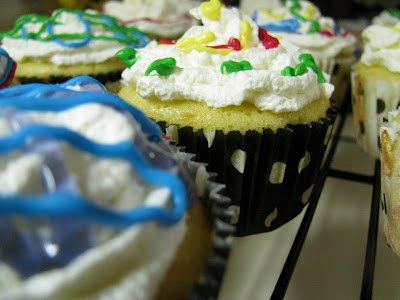 If you're looking for any type of nutritional value, you're not going to find it here.  Granted, most baking recipes fall a bit away from "nutritional", but this one doesn't even use any "fresh" baking ingredients.  There's a lot of processed stuff in there, but it's ok, because it's my unbirthday.

Today is a special unbirthday.  You see, my grade for constitutional law appeared on my transcript.  And, it was not pretty.  Apparently, someone forgot to notify my professor to factor my unbirthday into their grading.  Truthfully, after my con law exam experience (involving a 24-hour long total meltdown in which I questioned my sanity several times), the grade that I received is a blessing.  I was actually convinced that I would have to retake the course, which I don't.  But, it is still depressing and my worst grade of law school.  Really, really depressing.  Also depressing is the nasty weather we've been having here.  And the fact that I've been dealing with some strange spring/summer/why is it cold and rainy flu'ish situation.  Something else depressing is the fact that I am not in Orlando partaking in the grand opening of the WWoHP festivities.  So, I decided that my life (and Salem's life; she's been depressed too) would be a little bit brighter with some cupcakes and my unbirthday was the perfect reason to have them. 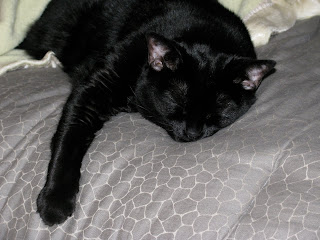 Unbirthdays are kind of hard to celebrate.  You want to be able to do the unbirthday justice, but seeing as there are 364 of them, you can't exactly be indulging in a piece of cheesecake every single day.  I mean, you can, but I can't.  I gain pounds within seconds of eating a cookie.  That's why I like Hungry Girl.


Several years ago, I discovered Hungry Girl.  I started receiving her daily emails when she was relatively unknown and unpublished (she has since published several fantastic cookbooks).  I found her recipes fun and inventive.  The oreo pie remains one of my favorite treats, I am a huge fan of the butternut squash fries and I love using pumpkin and applesauce while baking.  I don't follow her recipes often, but every now and then I stumble upon something fantastic and decide to make it.  These were perfect to satisfy my funfetti cupcake craving.  I ended up making 12 so, if we were counting calories here, each cupcake would be around 115 some calories for the way I made them.  Not bad for a sweet treat that tastes exactly like its 300 calorie evil twin.  The recipe may seem kind of strange and I'm now left with 1/2 a box of cake mix, but this simply means that it might be time to make some more cupcakes.  Thank goodness, I have another unbirthday today. 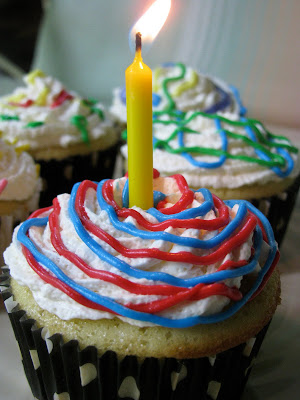 Happy Unbirthday Vanilla Cupcakes
from Hungry Girl
Yield:  Her recipe says 9, I got 12 and they were practically overflowing!
Ingredients
Instructions