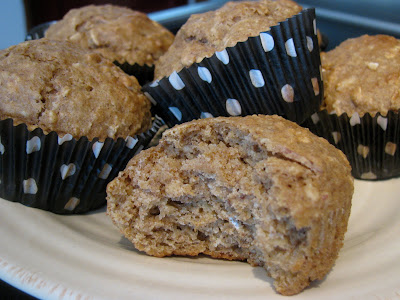 I normally have regular rolled oats in our pantry.  My granola is normally baked with the old-fashioned kind and I don't eat oatmeal enough to have quick cooking oats on hand.  But, I saw a muffin recipe that called for quick cooking oats a few weeks back.  The recipe must have appealed to me because I ran to the co-op to buy 1 cup of bulk quick cooking oats to mix up the recipe.  Naturally, I lost the recipe I was so excited to make (by lost, I mean, it got buried in the 700+ recipes I had bookmarked since that day) and ended up frowning at the oats every single time I opened the pantry door.  The lone bag even came with us on the move.  I was determined to use them.

The fact that I sheltered these oats for nearly a month (I'm lying, it was much longer) bothered me.  I need to start USING the stuff I am running to the store to get.  So, with some leftover buttermilk, I decided to mix up a new, different muffin mix.  I have no idea where I got the recipe and I have absolutely no idea how I came up with the concept, but they were absolutely delicious!!  I did not use butter or oil.  Surprisingly, they weren't so terribly dense (they still were more dense than most muffins, but I've gotten used to that; the baby food can be replaced with equal parts oil to solve this problem) that Ron balked at them.  And, I decided to experiment with baby food instead of applesauce.  I wanted to get a richer flavor and I chose to buy a sweet potato cinnamon kind.  It made the muffins taste, and smell, delicious!  By the way, baby food is disgusting.  Poor babies.  It was extremely bland and gooey.  Then I added sugar.  Much better.  But, poor babies.

I also have a confession.  I didn't put the dry ingredients in a separate bowl.  ***GASP*** I, the person who follows every recipe to a tee, mixed everything IN ONE BOWL.  And guess what?  Nothing happened!!  The oven didn't spit out the pan.  The muffins didn't burn with disgust.  In fact, they tasted just fine.  And even though I probably only saved about 30 seconds of hand-dishwashing time by doing this, I'll probably do it again.

I made some freezer jam while making these with some berries I had picked.  I ended up eating one of these muffins with some of the jam and YUM!  Not such a bad snack :-) 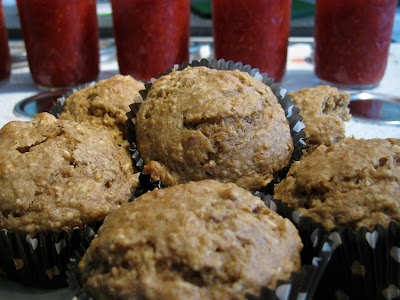