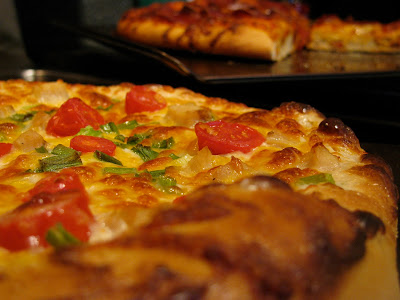 Home-made pizza night has turned into awesome night.  Since we purchased the pizza peel and actually learned how to use it, pizza night has been a fun, smooth process.  No more freak-out sessions as we try to get the dough onto the pizza stone without it falling part or folding.  Pizza peels are awesome!

Something else that is awesome is this pizza.  Seriously.  I ate a slice with a salad and was in happy land.  Sprinkle some hot sauce on it and it tastes like just a buffalo chicken pizza (hmm, recipe idea).
I ended up using only about 3/4 cup of cheese of mixed cheddar and mozzarella but I've left Annie's recipe as is to reflect her cheese amounts.  People like cheese.  Why cut it in half??  We also mixed up a pepperoni for Ron, but he tried the chicken ranch and was pretty pleased.  I think he would've ate more if I hadn't loaded it with tomatoes and onion.

I ended up using AP flour for the dough.  It was more of a mistake than anything.  I had pulled the AP flour canister instead of the bread flour without paying attention.  I don't think I would have noticed if I had used my stand mixer, but I chose to hand knead and the dough was so sticky.  I had to add about 1/4 cup - 1/2 cup more to get it smooth and elastic.  But, once I did, the dough was awesome, rose quickly and was easy to roll.  I don't know... I may have to think about using AP flour again.  Regardless of what flour is used, this dough is just delicious.  And so was this pizza. 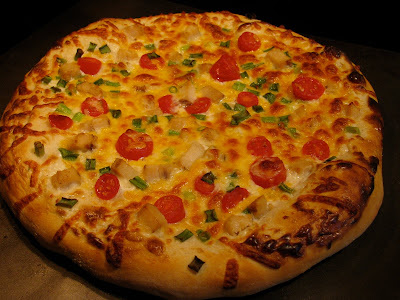