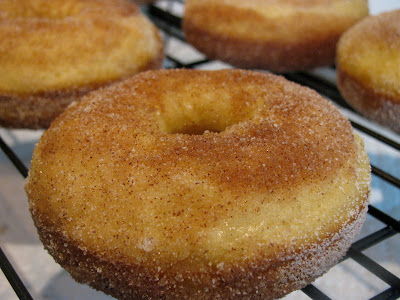 In high school, I worked at Dunkin Donuts.  I don't know why.  For some reason, my friend and I thought it would be fun to wake up on Saturday and Sunday mornings at 4:00 a.m. to go prep the donuts for service.  It was not fun and I eventually left the job after a few sleepless months.

Since my stint at Dunkin Donuts, I think I've eaten a donut one time.  So, eleven years since Dunkin Donuts, one donut.  Most donuts are not very healthy.  I remember my boss at DD teaching me how to make the donuts.  He squeezed one and literally 1/3 cup of oil just dripped onto the ground.  I'm pretty sure that's why I haven't eaten a donut since.

But, a few months back, I bought this fun donut pan with all intentions of making some donuts.  And baked donuts are a much healthier alternative.  And, since I just HAD to have this donut pan six months ago, I decided it was time to finally use it.  I recently saw the ideal donut recipe on a blog and knew it was time to mix them up.  The donuts were very airy, light-tasting and delicious.  You can easily control the amount of butter you spread on and how much cinnamon and sugar you use.  Ron ate 5, the recipe made 6.  I'd say donut morning was a success. 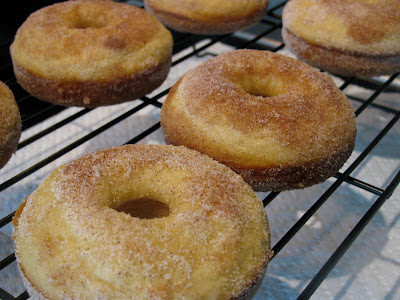