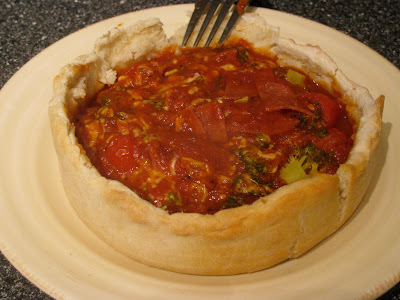 When Ron and I visited Chicago last March, a co-worker gave us a restaurant recommendation.  "Go to Chicago Pizza and Oven Grinder.  Do not get a grinder.  Get a pot pie."  We did.  And, it was amazing.  The waitress comes out with what looks like a blob of pizza dough.  She takes her spoon, scoops it around the bowl, and flips over the crust.  You're left with a pizza dough bowl filled with all of the amazing goodness that are pizza toppings.

Chicago is known for their deep-dish style pizza, so we were very fortunate to experience this little gem.  Had it not been for Julie's advice, we never would have found it.  In the past, we have always stuck to the restaurants in the Loop or at Navy Pier, simply out of comfort and because we were tourists.  But, after spending a day in Lincoln Park and feasting on a pizza pot pie, we were inspired to check out other delectable dining in Chi.  I actually attribute this restaurant to Ron coming around to the idea of moving to Chicago-land post-JD graduation.

The restaurant has its own recipe for their pot pies somewhere online.  I looked at the recipe and decided that it was wayyy too complicated for my brain to comprehend.  So, naturally I turned to Giada.  She had a very simple recipe and it was quite easy to adapt this recipe.  I decided to cut the recipe in thirds so I could just mix up 2 pot pies.  After seeing the measurements, I realized I didn't really need them.  I could easily mix up two separate pot pies in the ramekins and put in whatever I wanted.  I used some pizza dough from a recent pizza night that I had set aside for this specific recipe.  Mine was a vegetable pot pie.  Ron had some pepperoni and Canadian bacon in his.  Honestly, this was the easiest recipe I have ever made.  It turned out SO good and we are looking forward to our next pizza pot pie night.  I'm including the recipe for Giada's below, but after one quick glance, you can easily see how it can be adapted to your preference.  You can easily use store-bought sauce and pizza dough.

P.S.  I registered for this today.  It is a necessary stop on my path to becoming a Warrior Woman.  I also started another blog specifically for training purposes because I am sick of keeping handwritten logs and discussing training related instances on my food blog! 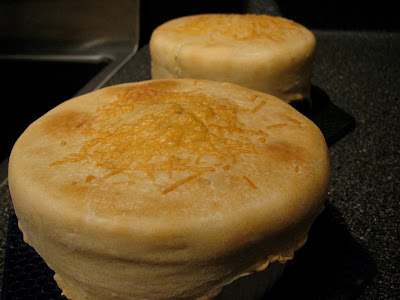