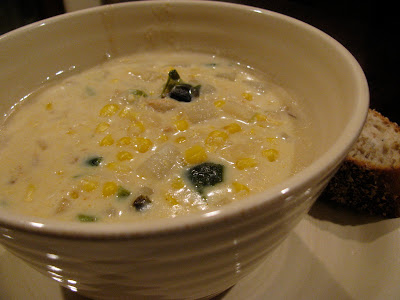 I like chowder.  It reminds me of the ocean.
Chowder has always been a once in blue moon dining experience for me.  I had never tried to make it myself because I've always been afraid of the fishy kitchen smell.  But, I'm getting over that because I realize that I really like seafood.  Since we moved, I've decided that the best way to work my way through my cooking magazines is to pick the few recipes that I absolutely intend to make (and forget about the ones that seem merely so-so).  Then, I make them and recycle the magazine.  This was one of the recipes that had me pause, mark as a maybe, flip back, reread the recipe, mark it again, flip back, and finally write it down on the weekly menu.
It seems like there are a lot of steps, but they move fast so it was easy to put together.  I did end up added a lot more seasoning to the bowl once it was done.  Both Ron and I really enjoyed it though.  You might think that the chile is going to cause the chowder to be too spicy, but it actually worked out rather well.  I think that the chowder would have been bland without it.
Spicy Corn and Crab Chowder
Cooking Light
Yield:  4 servings, about 1 3/4 cup
Ingredients
Instructions