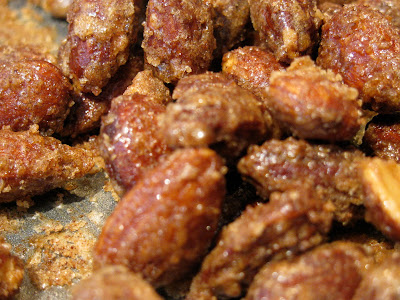 There are some smells in this world that can literally stop a person in their tracks.  For me, those smells involve anything with cinnamon and sugar.

Cinnabon cinnamon rolls in the mall.
Cinnamon sugar raisin bread in the toaster.
Cinnamon sugar pretzels at Auntie Anne's.
And of course, the worst culprit of them all, any type of cinnamon sugar coated nut: almonds, pecans, walnuts, etc., at any place that sells them!

My mom LOVES these nuts.  We often give them to her as gifts for birthdays or holidays.  And, she loves the nuts for a damn good reason.  They are awesome!  So, gift ideas were in the back of my head as I mixed them up.  :)

I see smell these nuts all the time.  At amusement parks, the mall, at Farmer's Markets, outside grocery stores, right in the middle of Vail Village in Colorado(?).  ("What an awesome day of skiing up on the mountains... I think it's time to buy some roasted nuts!")  But obviously, these things are sold anywhere because people will buy them, and I must admit that I purchased nuts in Vail Village before.  Seriously, once you smell them (often from a mile away), you subconsciously head in their general direction and inevitably purchase some.

So, one random Saturday morning, I was super excited to mix up my very own batch of cinnamon sugar coated almonds.  The kitchen smelled like a carnival, Ron wandered in from wherever he was and said "It smells awesome in here!," I took a bite of one of these almonds, then another, maybe a few more... and all was right in the world. 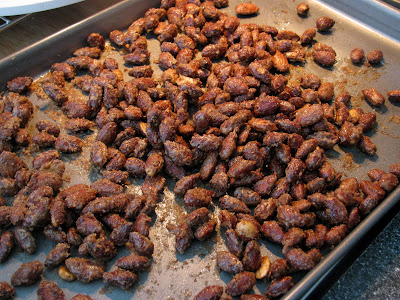