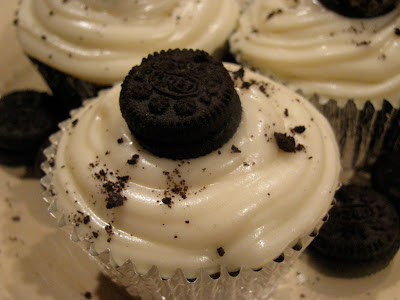 So, since then, I've been obsessing thinking about cupcakes. 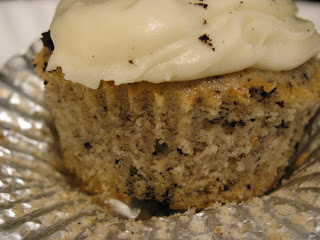 Damn it.  I NEEDED a cupcake.  And I needed a cupcake that was going to satisfy this craving (which means, not one of those sad looking cupcakes from a grocery store) and put an end to my cupcake daydreaming.

So, even though I have come to realize that I will forever be unhappy with kitchen appliances until I can purchase MY OWN and bake in MY OWN house, I decided to bake a small batch of oreo cupcakes that I have been dying to try.  I cut the recipe in 1/4ths as I realized that I needed to do some test runs with the oven before I started bringing goodies to share.  So, 1/4th of the batter was mixed and out came 6 beautiful looking cupcakes.

These were so easy to make and the idea that they were filled with oreos made the entire process fun.  Despite the fact that my oven told me it was baking at 350, when in fact it was only at 315, they turned out pretty damn good.  I cannot begin to tell you how delicious these cupcakes were.  They tasted like one giant oreo cookie in cupcake form.  And, then we put them in the fridge to keep and the end result was a cross between an oreo blizzard, an oreo cookie, and a cupcake.  Something like a bliz-ookie-cake.  I think I preferred the blizookiecake... but Ron preferred leaving his cupcake out to sit and adjust to room temperature.

Whatever your preference, my craving was satisfied. 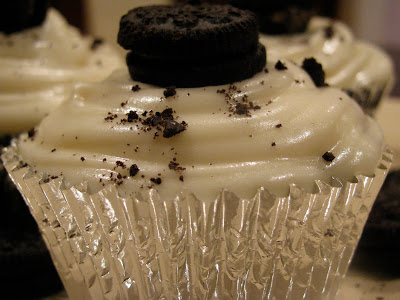