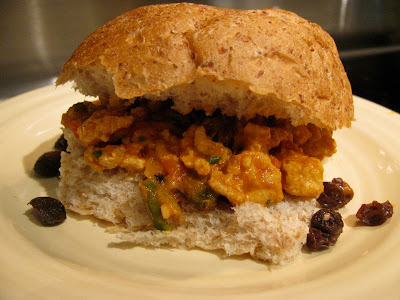 First off, I am well aware that it is virtually impossible to take an appetizing photo of a sandwich that is called a sloppy joe.  So, I hope you don't discriminate against this recipe, because it's really good!

I've been wanting to try one of Aarti's recipes since she won the Next Food Network Star this past season.  Unless you watched NFNS, you have no idea what or who I am talking about.  The show aired over the summer and finished several weeks ago.  Aarti, whose "food schtick" is introducing indian flavors to american cuisine, has her own show on Sunday mornings called Aarti Party.  Recently, this recipe ran in the October issue of Food Network magazine and I knew it was time to make something of hers!

Ron has always been a fan of NSSJ's.  At one time, we had several jars of Not So Sloppy Joes in our pantry.  But I must admit that they were never used so they were donated.  I'm not such a fan.  And since I am the one who cooks, I've opted never to make them.  But I decided to try this recipe because I thought the ground turkey, pistachios, raisins, and indian flavors sounded like an interesting combination.  I forgot to season (oops!) so I thought the recipe lacked "something" as I was eating my sandwich.  So, make sure you season!  Salt was a necessity here.  Ron loved these.  He went back for a triple helping (in Ron's defense; he doesn't have time to eat lunch at work, then he works out, so he's a hungry boy) and had nothing but great things to say after he finished off the leftovers the following day.  I didn't see him use salt once!  I left the raisins out of the main batch because he doesn't eat them, but I chose to add a few on my sandwich.  Honestly, raisins totally work in a sandwich.  Overall, this recipe was a success.

Also, I highly recommended that you don't mince chile peppers and ginger, then rub under your nose.  Seriously, my face was burning for a few hours and I am thanking my lucky stars that I didn't rub my eyes first.  Otherwise, I think I would have had an inkling as to how mace feels when it is sprayed on a person's face.  Holy buckets was my nose on fire!