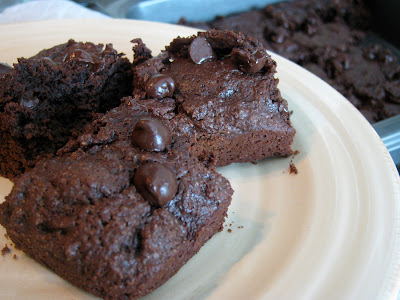 When in doubt, bake brownies.  This is what my facebook status said the other day.  Anybody who was doing their detective work on my page would find that just seconds before I posted my brownie update, I had made an unfortunate comment about the lack of progress I was making in midterm preparations.  Hence, the brownies.  Thank goodness they were still around after the midterm.  Sigh.  When is school going to end?  I miss feeling like a smart person.

Anyway, I entered the kitchen with one thought and one thought only:  comfort food.  I knew I had planned to make brownies the next time I was interested in chocolately, cakey goodness.  And, I knew just the recipe I wanted to try.  The brownie recipe came from a Cooking Light recipe several years ago.  Normally, I'm hesitant to try the C.L. dessert recipes.  Sometimes the recipes can be just the same as other recipes, except they cut the portions into itty bitty bites to cut the nutritional values!  Sneaky, sneaky.  Other times, the recipes come out pretty dry.  And, I wanted a true, fudge cake brownie, not something infused with applesauce and bland tasting.

BUT, this recipe DID NOT taste like a "light" version of a brownie.  It was delicious!  I only used 75% of the sugar the recipe called for and I used espresso instead of instant coffee granules.  WOAH.  I took one bite and was seriously, seriously happy with how these turned out. 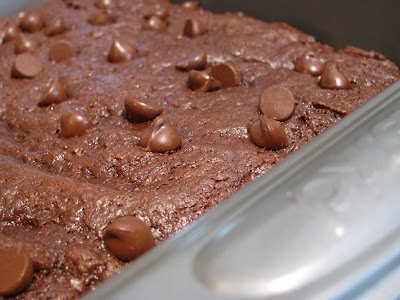