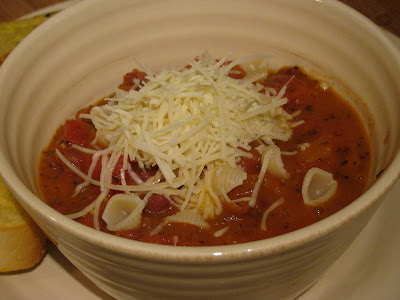 The other day, I was at the grocery store searching for some fresh cranberry beans to make a pasta fagioli.  I had found a recipe I really wanted to try and was eager to pick up the beans.  I was literally squatting down as far as I could to get a look at the beans (dry beans are on the bottom of the shelves) when a kind person who worked for the grocery store approached me with a cautious eye and asked if I needed assistance.  "Cranberry beans?" he asked.  "No, I've never even heard of them."

I really wanted to tell him that they weren't absolutely necessary - that I could use any bean without a problem - but he seemed eager to help in this search.  He radioed for a number of his fellow co-workers to come over.  They even called other stores and logged online.  Twenty minutes, and a long discussion later, we had no found any cranberry beans, but I had spotted a lovely jar of Eden Organic Aduki Beans.  I'd never heard of them, but I was interested in trying them.  At that point, I hated the thought of waiting to soak my own beans, so off I left with a jar of pinto beans as well. 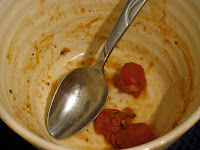 Aduki beans.  I had never heard of them until that day.  But, they worked awesome in this recipe.  I have posted other pasta fagioli recipes on my blog in the past, but I'd like to think that the true italians would approve of this recipe the best.  "True" pasta fagioli recipes involve pasta, beans, and cheese.  No veggies.  No meat.  So, this recipe is true (with the exception of the canned ingredients, but oh well).  And, this recipe has become my absolute favorite soup-meal recipe of all time.  It was delicious.  And, when we ran out of pasta (I only used about 7 ounces of pasta), the leftovers were just as good without.

Oddly enough, I've seen aduki beans everywhere since I bought that can.  Perhaps I've never noticed them before?  Or perhaps this is a new trend?  Whatever it is... I've seen aduki bean everything!  Aduki bean corn chips.  Aduki bean rice.  And, I just opened up a small free sample jar from the Body Shop, and it is some type of aduki bean and rice shower gel.  What the...?

Oh, and the picture above?  That's Ron's bowl.  I just had to take a picture of the tomatoes that remained. 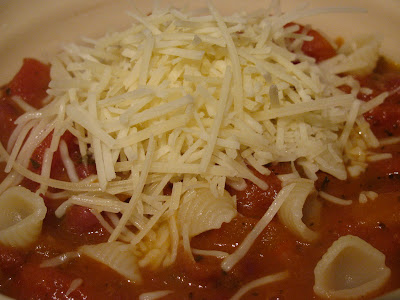