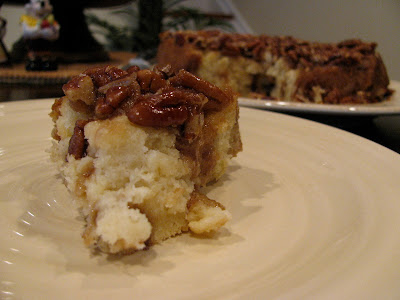 Has anyone ever noticed that Mickey Mouse appears in most of my photos lurking in the background?  He is my pepper shaker and he likes to oversee things.  (Minnie Mouse, otherwise known as salt shaker, is quite shy.)   I've also realized that my plates are quite boring.  I might need to invest in some prettier plates so I can have better looking food photos.

Ron's been working like a mad man.  His job is keeping him at work from 9 am - 9 pm on most nights and he is gone on weekends.  It's been making me sad because I don't really see him - and when I do see him - he's staring at his Blackberry and normally not "all there" because he's so focused on what's going on at work.  But, his job is demanding right now and it requires his full time.  He's an important dude and I'm envious of his knowledge at his place of employment.  But, it still makes me miss him and it makes me wonder how my parents made it through so many years of long hours and time away from one another.

My dad didn't always have a relaxing job.  I don't think he's ever had a relaxing job.  (Where are these relaxing and fun jobs that a small group of people talk about?)  But, I especially remember when I was younger and his job was in Pittsburgh, while our family was in Allentown, PA (closer to Philadelphia).  He would often make the 4 hour drive on the turnpike just to be able to spend the weekends with us.  Eventually, we moved to Pittsburgh, but I cannot imagine how grueling that lifestyle was.  I also remember a time when I was younger and my dad was working two jobs.  He would work his day job from early AM to the standard PM hour.  Then, he'd come home and sleep for a few hours before he would head out to his late evening to early AM shift.  It's truly remarkable to think what parents do for their families.  I didn't appreciate those efforts at the time because I did not understand the full extent of why my dad had to work two jobs, or why he was gone so often.  But, I do now.  And I don't like letting many days go by without letting my parents know how much I appreciate them now, then, and always for everything they have ever done to provide such a wonderful life for my sister and I and to build an amazing family. 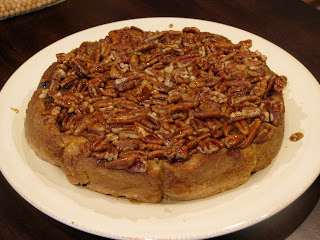 Even though Ron doesn't work 4 hours away and even though Ron is still able to sleep next to me in bed at night, I do miss our time together.  I took for granted how valuable simple dinners can be at a decent hour or how valuable our Wednesday night TV time can be.  So, I wanted to bake him something that he would enjoy to thank him for his efforts and to tell him that I love and support him.  He is, after all, the one essentially supporting our family will I am pursuing my law education.  He has a huge burden to bear and he followed me to Minnesota to pursue my dreams.  I only hope I can do the same for him in the future.  He's a huge cinnamon bun fan, so I figured it would be time to finally tackle some type of sweet roll.  I mentioned a few days ago in my 'One Year In' post how all attempts to cook and bake have not been total successes.  Cinnamon buns, which I have tried to bake over 3 times now, have always been my nemesis.  We even had one disaster that involved me throwing dough around the kitchen and then spending 2 hours cleaning it up.  Oi!

I'm glad to say that I finally found a recipe I am happy with.  Even though it was not really true cinnamon bun per se (no yeast), it still involved rolling the dough which always seems to develop into a situation.  I'm not going to say this experience was totally perfect, but I will say that they turned out quite yummy.  Ron was definitely impressed and devoured a pecan bun with a big smile on his face. 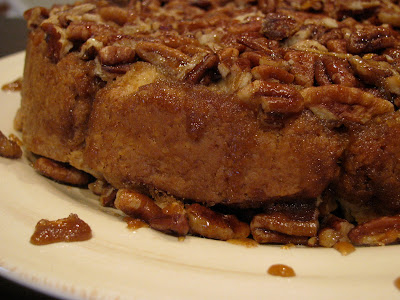