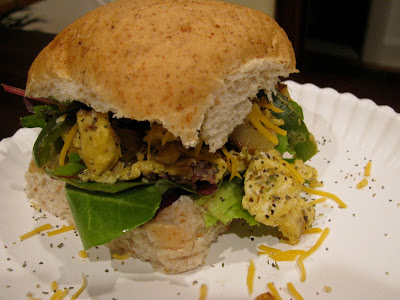 I was very hesitant to post this recipe.  I've actually held off on posting it for some time now.  You see, the recipe itself was good, but it caused quite a bit of turmoil in our house the evening it was served.  For those who don't know, our little Minnesota family consists of four: myself, Ron, and our two little fur-balls, Salem and Cali.  Basically, these two little cats run the show here.  They awake at random hours and wake you up in return.  They throw hissy-fits if they are hungry.  Actually, they throw hissy-fits for no good reason.  And by hissy-fit, I mean that they knock things over and purposely break them.  (I've lost nearly a dozen vases and picture frames since Salem entered my life.)

They also eat things... that require emergency veterinary assistance to remove from their system.  Like onions.  Like onions from this recipe.  Without getting into all of the details (both mom and cat were at fault here), let's just say that animals can't eat onions and once a certain amount is digested, it can become toxic to an animal.  Salem is fine now (she just knocked a glass of water all over my desk as I was typing this post, so she's obviously back to normal), but it was an interesting, sleepless and expensive night at the emergency veterinary hospital.

As for the recipe, it was definitely worth making - a good, quick recipe.  It would be perfect to serve for breakfast, or brunch, even though Ron and I ate it for dinner.  However, after taking one bite of the sandwich and watching 3/4ths of the filling fall out, we did end up switching out the rolls in lieu of tortillas.  Check it out!  Just don't let your pets get to it. 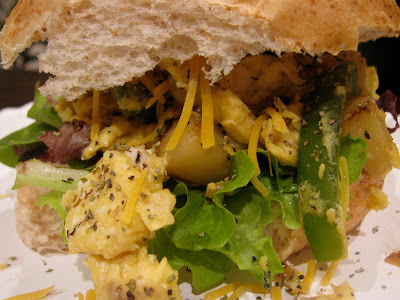