I've mentioned often on the blog how much I love home-made pizza nights.  We recently tried yet another pizza establishment in the Twin Cities.  I won't mention it's name but it had been receiving rave reviews from every single person in Minneapolis that has dined there since it's opening.  The owner actually went to culinary school in a state on the east coast that is known for it's pizza, so we went in with high expectations.  Sigh. 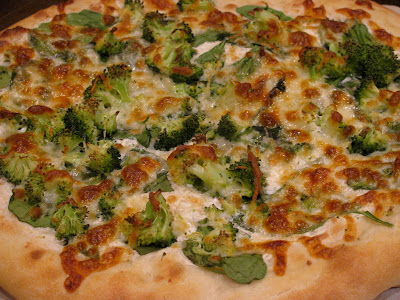 We've decided to stop trying pizza places in Minnesota.  We have gone EVERYWHERE in Minneapolis.  (Cossetta's, Pizza Luce, Punch, Red Savoys, Pizzeria Lola, Black Sheep, Green Mill, Carbone's, random shops on the side of the road, the list goes on, and on, and on.)   Sorry, folks.  We have tried.  There is nothing like east coast pizza and the pizza we were used to before coming to Minnesota.  I'm not saying the pies we've tried here have been bad.  Some have actually been quite good -- if that's what you are looking for.  It's hard to describe.  I'm used to a specific pie and I can't find it here so we're just going to stick with home-made pizza from here on out to avoid any further disappointment.

This was an unusual take on a pie that I had never experienced until now.  But, I decided to give it a go based off of pure intrigue.  Pizza nights normally involve two pies so I knew I would have a back-up if I didn't like it, but I loved it!  I was actually quite impressed with how the white sauced turned out.  It would be delicious on noodles as an alfredo and I might have to remember this next time we need a quick dinner.  It was incredibly easy to whip up and was a delicious alternative to your standard red sauce pizza.  If you ever see it on a menu, I recommend trying it out!
Spinoccoli Pizza
from Annie's Eats
Ingredients
White Sauce
Pizza
Instructions