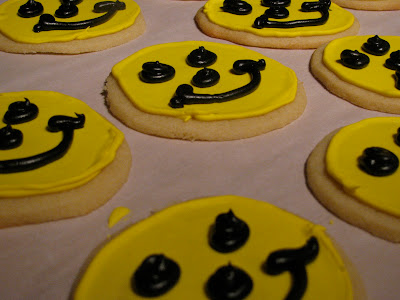 Technically, these are just regular sugar cookies.  But, in light of the upcoming AFC Championship game, I've made them into Steelers Smiley Cookies.  They aren't as good, but they will suffice.  You see, living in Minnesota means that we can no longer take part in the Steelers celebration festivities.  This makes me incredibly, incredibly sad.  Though I enjoy Minnesota, there are so many traditions that carry on around sports in Pittsburgh.  Not being surrounded by them can be really crappy.  (Especially when you've missed out on two major events since moving from Pittsburgh: winning a Superbowl and winning the Stanley Cup!)

For instance, in Pittsburgh, every single store is currently decked out in black and gold.  When I say decked out, I mean decked out: terrible towels handing from the ceiling, Steelers emblems plastered all over the place, store employees in black and gold from head to toe.  Grocery stores have been selling Steeler themed foods since pre-season.  They have arranged their giant Coke display in the window to read, "Go Steelers!" since August.  Men are walking around with faces full of hair as they all try to grow their play-off beard.  Restaurants are selling Steelers themed food, such as a "Roethlis-burger."  You can't get in the car without hearing a Steelers song.  People have been wearing black and gold for weeks and if you own a Steelers jersey, you are wearing it today!  Attending the pep rally is essentially considered "work" and is a viable excuse to take a 5 hour lunch and come back slightly buzzed.  And the tailgates?  The tailgates are insane!  I can't even get into the tailgates. . . Dem folks are drinkin' as much Irn City as they can dahntown and cheering for dem 'Stillers now!

I've been streaming in DVE Steelers songs all week and wearing Steelers gear every single day.  My Terrible Towel rests on the dashboard of my car and I've been prepping my game-day menu, but it's not the same.  There is nothing that compares to Pittsburgh.  After living in a different part of the country, in different fan territory (and witnessing that the recreation paths seem to be MORE crowded during said fans respective game that day; gasp!!), I can honestly say that Steelers fans are the best.  There is a reason why it's called 'Steeler Nation' and there is a reason that there is a Pittsburgh Steelers dedicated sports bar in nearly every single city in the world.  Pittsburgh is definitely a sports town (with a drinking problem ;) ) but it is a place that I miss very much, and especially around these times.  I've been a Steelers fan since I was in diapers and that is absolutely never going to change.

A local restaurant on the east coast, Eat-n-Park, opened in 1949 and has since greatly expanded.  It was a place that I frequented often in high school for late-night hangout sessions and to buy mozzarella cheese sticks at 2 a.m.  But, they are also known for their delicious Smiley Cookies.  They are sugar cookies that rock!  You can purchase the cookies and have them shipped anywhere (and if you live in the opposing team's area, you can get them shipped for free!) but I chose to make my own.  The yellow is slightly more yellow than I would have liked, but they taste delicious just the same and they feel like home.  The cookie recipe itself was easy (though sticky!) to mix up and roll out. 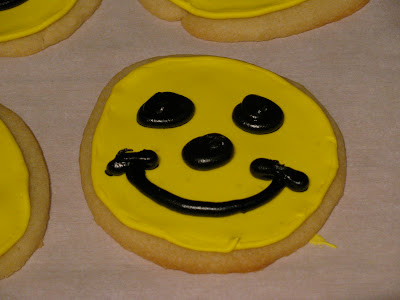