Yay, Mardi Gras! Also known in English as Happy Fat Tuesday! Mardi Gras, a holiday celebrated in New Orleans, and around the country. I've never been to any Mardi Gras festivities in Louisiana (never been to LA for that matter). Ron has been to Mardi Gras. He went as a young college guy. He went with 20+ lacrosse players. I saw one picture. I never looked, asked, or talked about it again. 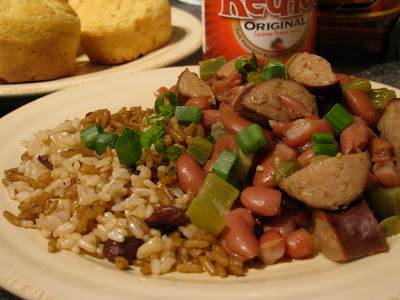 Mardi Gras occurs every year on the day before Ash Wednesday. People continue to party and throw down until Lent begins at the stroke of midnight. The "fat" part comes in because people tend to eat fattier foods before the ritual fasting that comes with Lent. I don't completely understand the concept. To me, it's kind of like shoving a bunch of cake in your mouth before the clock strikes midnight on January 1st, but whatever. I like holidays so I'll celebrate Mardi Gras too! I was torn with what to make for Mardi Gras this year. Initially, I had planned on baking a King Cake, but saw this recipe posted and felt it appropriate to try and make some actual food with the time that I had. This recipe makes an absolute ton of food. The recipe yields 6-8 servings, but I swear my portions must be small because we had a lot more than 6-8 servings! The recipe came from the January 2010 Cook's Illustrated. Like everything I see, I have been wanting to make it ever since I saw it. It is an interesting take on a red beans and rice recipe. Having never been to New Orleans, unfortunately I have no comparison. But, this was a lovely little taste of the Big Easy at home. Serve it up with some cornbread and enjoy!
Cajun Red Beans and Rice
from Cooks Illustrated, Jan/Feb 2010, found on Pink Parsley
Yield: 6-8
Ingredients
Instructions