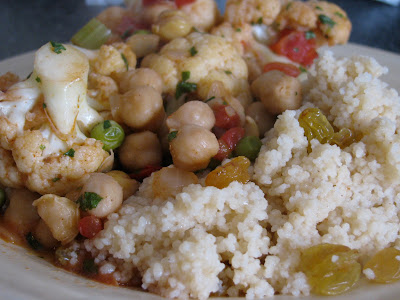 I remember the first time I heard of couscous. It was several months before Ron and I moved to Minnesota. We were still stuck in our chain-restaurant phase and dinner at TGIFriday's was a date. My boss at the time, a lovely Professor in Anthropology and respected Dean, had suggested that we try this cute little cafe in Bloomfield. So, Ron and I went. It was completely different from any place we had ever been before. It was quaint, a tiny little cafe, and had a definite "hippie" vibe. Most of the food was vegetarian or vegan (you can imagine the look on Ron's face) but we were open to change (at least I was). When the waitress came to take our order, she asked what side we wanted. Ron inquired about the sides and she answered. They consisted of fresh fruit, mixed greens, or a couscous salad. "Goo goo?" Ron responded. "What is goo goo?" The waitress kindly smiled and replied, "couscous?  It's a type of grain. After she left, we both started laughing. "Goo goo? Where have you taken me?" I can't recall the side that Ron ended up getting but little did Ron know then that I would be taking us to random little restaurants and cafe's similar to that one from that day forward. Chain restaurants became a thing of the past and vegetarian influenced meals and fresh ingredients began to dominate our kitchen. And "goo goo" would become a staple in our house.

I love using couscous and I make it several times I week. I absolutely love its earthy, nutty texture and the nutritional value to boot. It is so versatile. You can mix it with anything and basically come out with something delicious! I must admit that I often turn to the "western supermarket version" (aka quick cooking) couscous, but I have enjoyed the "real deal" in the past (YUM!!). Here is a delicious recipe for moroccan-style chickpeas for a Meatless Monday meal. 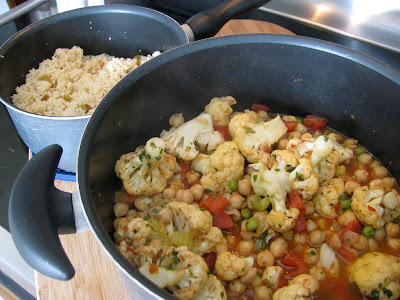