I don't know when the trend began. But I can no longer eat pasta or soup or a salad without having a nice giant slice of bread next to me. I think this began when Ron and I started dating. We often ate pasta at his parents' house and there was always a basket of bread on the table. Oddly enough, I didn't start eating all of these "carbs" until the whole low-carb / no-carb diets became trendy. Perhaps it was my way of saying 'screw you' to all of the carb-naysayers out there, but I was indulging in the bread basket. And I still do! 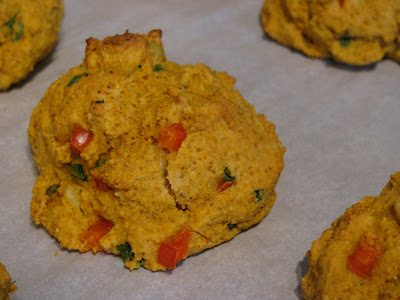 With pasta, it's always some kind of cheese bread or garlic bread. With soup, it's always some kind of herb bread. With chili, it's always cornbread. The last time we had chili, I was looking for a different type of corn bread and landed upon a corn muffin recipe published in my Dorie Greenspan cookbook. They were supposed to be muffins, but I decided to change them to bites when I realized that I did not want to use the last of my liners. The bites have a little bit of a kick to them, but I definitely could have used more! I might have to add more jalepeno next time or maybe mix in some sharp cheddar cheese to change it up. But whatever I do, they will definitely be served with chili again.
Savory Corn and Pepper Bites
from Dorie Greenspan: Baking from My Home to Yours
Yield: 12 bites (of muffins)
Ingredients
Instructions