I'm still here! I just took some time away from my blog and cooking because things got a bit busy. We had a house-guest. And there was an Admitted Student Day. And I was preparing for my final advocacy trial. It's amazing how much time can be spent preparing for something. My portion of the trial lasted 30 minutes. Yet, I spent probably about 30-40 hours preparing for it. This is not a joke. Of course, because of all of that (and Mother Nature's crazy abrupt weather changes) I am now sick again! So, the blog is in need of a pick me up and I am posting a delightful treat! 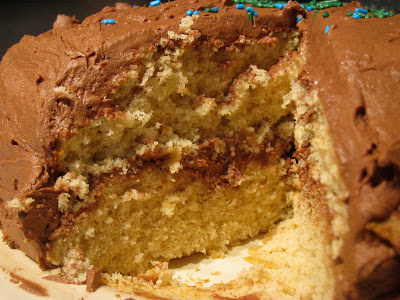 OH my goodness. Wow. This cake was made for Ron's birthday. And it will be made for birthdays to come. It was my first time browning butter. I was standing there for a good five minutes before anything happened. But then it did. And it was life-changing. I'm going to brown butter every single day!!  It smelled amazing. Then it turned into a nutty, caramel smell. And it permeated throughout the entire house. And then I put the cakes in the oven. And they smelled amazing. And then I took them out and set them on the counter to cool. And I guess the cakes smelled so amazing that they attracted our four legged friends. Cali, our sassy little calico cat, was caught on the counter with crumbs on face. She was standing on one of the cakes. I frisked her off, shut the door, and went about my business fully intending to deal with the cake once I was done. Apparently, I should have checked to see if Salem was locked in the kitchen when I shut the door. Because she was. And she too had her share of birthday cake. But her crumbs covered nearly all of her tiny chin. What a messy eater!

The cats ate one half of the cake. And then they ran around the house like they were on drugs. I was highly annoyed, but I chose just to cut off the parts that I knew they had attacked. Honestly, we might have been eating cake that had been stepped on, but we didn't care. This cake was so good. It's no wonder the cats ate so much of it!
Browned Butter Birthday Cake
from Honey and Jam
Ingredients
For Cake
For Frosting
Instructions
For Cake
For Frosting