I've been eating soup for lunch almost every day. Soup is my go to dish of choice when the weather is balmy and cool. And well, the weather is balmy and cool here. The other day, I woke up and had a cup of coffee with sliding glass door open and the fire going, draped in a blanket. (Yes, I could've kept the door shut but I wanted fresh air.) It's kind of funny: I read an article about how Seattle has only had 78 minutes of summer so far. Fortunately, Ron and I were here for all 78 minutes, but it's certainly taking time to get acclimated. I can't go for a walk without a sweatshirt! I'm not used to that during mid-July. 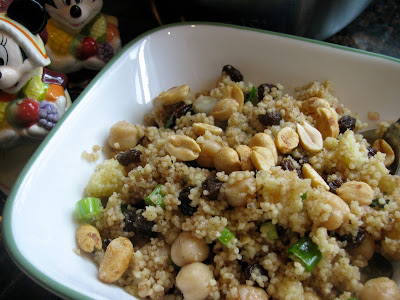 But here's the thing. I'd rather be wearing sweatshirts than sweating my a** off anywhere else. I feel terrible for the rest of the country. The other day I clicked on the Minneapolis weather report to see it read, "96 degrees. Feels like 120 degrees." WHAT? Ron's dad sent me an email from PA with the following, "It is absolutely miserable here. I can't remember the last time feeling like this. You go outside and take a breath and it's like you were sucking air on your exhaust pipe. It is starting to get on my nerves." Ron's dad is the most jovial individual I know. So if the heat is getting under his skin, I can't imagine what I'd be like. Honestly, if I was in Minnesota right now, I'd be livid. LIVID. I don't love hot weather. In fact, it makes me quite angry. The heat makes people do crazy things and I'm no exception. I'd be swearing at Mother Nature on my bike rides, if I could go out. I'd be swearing at Mother Nature on a run, if I could go out. And the cats would be panting and looking at me hopelessly. So, I'll be quiet and not complain about the weather we are having in this part of the country, because I'm well aware of the alternative. And I'm happy to be away from it.

The sun came out the other day and I knew I had to make something else. I hadn't made a grain salad in some time so I decided that the sunshine meant it was fate. I had bookmarked this recipe a few weeks ago and was intrigued by the cinnamon vinaigrette. So I decided to whip up the dish to see what it was all about. The recipe makes a ton of couscous, so cut it in half if you're only serving two people or using it as a side. But overall it was very good. The vinaigrette added such a unique flavor to the traditional texture of couscous. The mint and green onions added the necessary "earthy" component to couscous. And the raisins added a much needed tang. I would definitely make this was dried cranberries, or dried apricots, next time around. As per usual, I added nuts. I love couscous, but I need crunch. I guess I could've subbed in some chopped celery or sugar snap peas for crunch, but roasted peanuts were appealing so in they went. I rather enjoyed this couscous salad. And I'll be having lunch for quite a few days, so it's a good thing it was tasty. 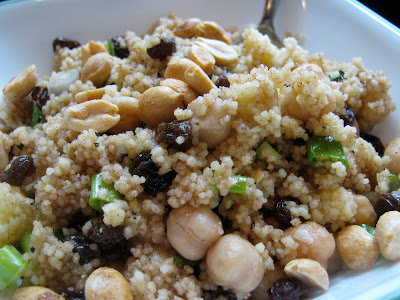