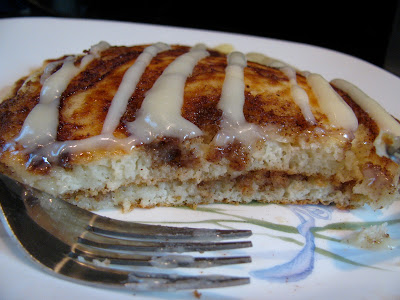 Ron and I are on completely different breakfast schedules. I'm an "I need to eat as soon as I get out of bed" type person and he is a "I need to be up for a few hours before I eat, if I eat at all" type person. Ron is also a late-riser, while I am an early bird. Pair this with the fact that I get sick, grumpy and/or angry if I need to eat and you can see how this poses a problem when we have a planned breakfast, like pancakes.

Sundays tend to be "eat more breakfast than usual" days in our house. It's the day when I go out for longer runs so I'm normally up around 5:30 so I can eat, hydrate, glance through the paper, smell some fresh air and wake up before I head out for a few hours. So even though I love having pancakes before a run, I normally don't eat them unless they were frozen and reheated. (Blech?) I've confessed this before - but it needs to be re-confessed - I've never been successful with pancakes so Ron is the griddle-man. Yep. I refuse to attempt pancakes unless Ron is the one making them. It's worthless (and embarrassing). 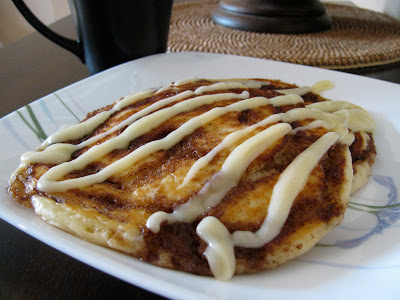 But, we sure love pancakes in our house so despite the mess, they are made often. In fact, pancakes-for-dinner is currently on the planned menu for Wednesday of this week. :) And when Ron rolled out of bed yesterday, I had a treat for him that I was super excited for him to try. Regina, one of my loyal blog readers, sent this to my mom and my mom forwarded it to me. Ron is a cinnamon roll fanatic - and I NEVER make them because of a few past incidents with the rolling pin - so I was super excited to give these a try. Unfortunately for Ron, this meant he had to actually cook his own breakfast. But I did everything else so who can complain? (Well, he does. But he's a grumpy morning person.)

These pancakes were so fun and very decadent! I wouldn't eat these everyday but they are definitely going to become an occasional treat! They tasted exactly like cinnamon rolls, without all of the rolling, so I was very pleased.  Thanks, Regina, for reading my blog and for forwarding along such a fun recipe! 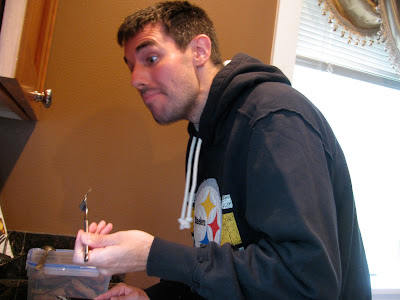