Ron and I used to watch a lot of the reality t.v. food shoes. Hell's Kitchen, Kitchen's Nightmares, MasterChef, Kitchen Impossible, Dinner Impossible, Great Food Truck Race, that show where "Soul Daddy" won three restaurants but then they shut them down within weeks of opening, including the Minneapolis location, and ripped that poor guy's dreams right out from under him and never spoke about it again, NBC Fail. But then we realized that the majority of them annoyed us. We'd actually allow them to back up on the DVR and consume nearly all of our space. Then we'd get stressed out when we realized we had an entire season of the show to watch. It was a nightmare. We hated watching them: the drama, the smoking, the not-so-subliminal advertising plugs... so finally, we pulled the plug. But we did stick with one show: the Next Food Network Star. 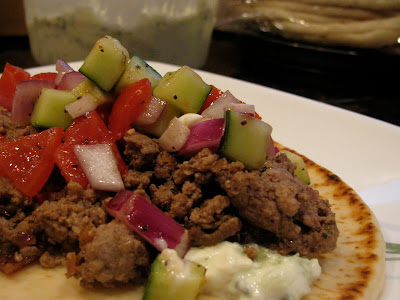 I'm not sure why we enjoy this show. Maybe because there is some "reality" to it. The chefs are actually cooking their own recipes. They are telling their own stories. They actually win something (did you know: most winners on Hell's Kitchen don't get to enjoy the luxury of being an 'executive chef' at the winning location, many don't even get one foot in the door!). And we've watched for the past three seasons and enjoyed the winners. Oddly enough, we usually don't always end up watching the winner's show. I catch a few of them on occasion, but I don't make it a necessity to watch Food Network at 6 a.m. P.S.T. on a Sunday. However, I have tried their recipes and thoroughly enjoyed them. (We made Aarti's Mango Pulled Pork a few weeks ago. I tweeted about it, she tweeted me back, it was awesome.)

But we have been watching the most recent winner, Jeff, on a consistent basis. He's theme was "the Sandwich King" and we love sandwiches in this house. His show is new, so it's rocky, but Ron and I actually enjoy watching it. Ron says that it is actually stuff he can do in the kitchen. But Jeff takes us on journeys to restaurants around his Chicago home, so, well... we know I'm a fan. Jeff's show is on Sundays at 11:30am/10:30c. For years, sandwiches were all that I ate for lunch and most dinners. So, it's exciting to watch someone who is passionate about making sandwiches into something special. Sure, his sandwich recipes often take longer than an actual non-sandwich meal to make. But who cares! His concept takes your general ideas about sandwiches: lunch meat, slices of tomato/lettuce, and bread and takes any meal and turns it into a sandwich. We recently tried out these Greek Tacos and thoroughly enjoyed them. My mom loves gyros so I know she'll love these. The home-made tzatziki sauce was amazing and so easy to make! I'm excited to try more of Jeff's sandwiches. 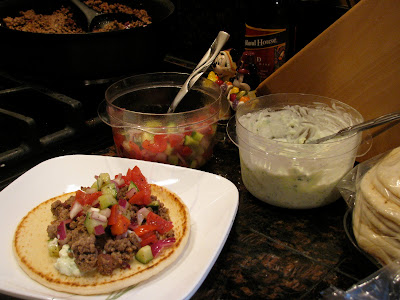