In February 2011, I started planning our January Disney 2012 trip. I know, it seems a little ridiculous. Eleven months ahead? But trust me, it's necessary in order to carefully plan the best trip for value and to ensure that you get a spot at your favorite restaurant 180 days in advance of your vacation. Those get-in-the-park-before-opening-hours character breakfasts aren't available if you try to book two months out! And cast members will laugh at you if you walk right up and expect to get a table. I've become quite crafted at preparing the most awesome trip as Disney possible for myself and Ron. I take pride in this. We go often and I somehow manage to make sure that we do something new, try something new, and stay somewhere new each time. The Walt Disney World Resort is always changing, so I try to make sure that our trips are as new and fresh as possible. This involves a lot of careful planning and copious amounts of research. But I absolutely love this so should you ever have any specific Disney, Universal, or Orlando related questions, I'd be happy to help! I read Disney Imagineering books for fun and I can tell you things like "Walt Disney's "room" above the Ice Cream Parlor is the only window on Main Street that has a view of Cinderella's Castle." 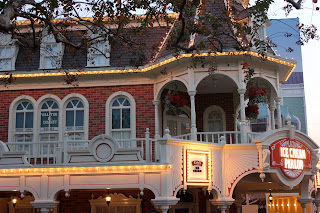 So here we are in January 2012 and I've already planned out our entire 2013 Disney vacation. Yes, my friends. We're going back. We'll always be going back. I can't stay away from that place and I'm so grateful for my ever-so-patient husband who recognizes that I adore Disney. Besides, I owe myself a runDisney medal, as I did not receive one this past marathon weekend. Sad. Here's the story: I had no time, energy, or strength to run. J-Term beat the heck out of me. I finished the class, rushed to the airport, hopped on a plane and arrived in Orlando feeling super... exhausted. I was practically out of it by the time my flight arrived in Orlando at 10:00 at night. I was running on no sleep from the night prior, minimal food and hydration. So, strange things were coming out of my mouth when Ron picked me up at baggage claim. I was seeing more furry creatures than just the Disney characters in the airport. From there, we were off to our Disney hotel for the night to prep for the run the next day. You might be wondering, why did you plan a run the day after your class ended? Isn't this your fault? Well, friends... J-Term was not in the plan at the time Disney 2012 was booked.

We had a 3:00 a.m. wake-up call and it was already 11:30 a.m. by the time I climbed into bed. I started noticing that I was having heart rate issues. My breathing was stale and I was very clammy, something that happens when my heart rate spikes too fast. So, I tried to rest but watched the clock as it ticked by from midnight until 2:59 a.m. when the alarm went off. I got up to prep some coffee and noticed I was out of breath just from getting out of bed. I went outside and did a brief jog that solidified what I had been thinking the night before. It was not worth it to try and do the run. :'( I woke Ron up, who told me he felt the same (he had not slept either on his red-eye flight), and we decided that our trip was more important than face-planting the pavement during the race. We had 5 days of meticulously planned theme park a-going so we decided that we'd be back in 2013 to run the run we didn't do in 2012. 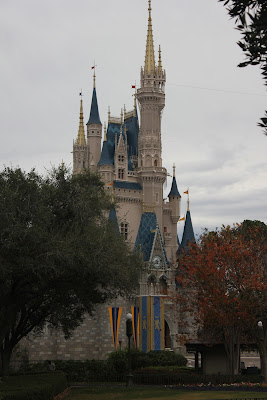 Looking back, I'm glad we didn't run. Our trip to Orlando was pretty incredible and we could have potentially ruined it if we'd forced ourselves to run. Granted, I know we would've finished but bad things happen to your body when you force a run on no sleep, no hydration, no food and no mental stability. Sigh. It still stings though. This is a bad habit that I need to break. Anyway, we had two days at the Hard Rock resort over by Universal (gorgeous hotel, within walking distance of the parks, early access, and front of line perks; highly, highly recommend!) then we shifted back to Disney where we stayed at the Beach Club Resort for the remainder of our trip. It was a blast. It was our first time at the Beach Club Resort and as a perk of visiting during the time we went, we received a free Disney Dining Plan (over a $300 value), which is something we'd never done before. I'd spent so much time researching dining options (what qualifies as a snack? where do you get the best bang for your buck? who has the best table-service menu? what is the best quick-service meal?) and had booked our table-service reservations by the time we arrived. However, choosing snacks and quick-service meals was so much fun! We would absolutely do it again and if you go down to Disney, I highly recommend the Dining Plan (at least if its free) and researching dining options ahead of time.

In Epcot's World Showcase, Norway has a well-known bakery called Kringla Bakery Og Cafe. We normally stop in there on our way to the Maelstrom ride to pick up a sweet pretzel or another treat. We'd never had the School Bread but I've always wanted to try it. So, we planned to use it as one of our snack options but was thrown off course after Ron learned it was covered with coconut shavings. This threw our "snack plan" into total derailment and Ron had a pout session because he was peeved about the addition of coconut. I recalled seeing the recipe on the Disney Food Blog site so I made a note to surprise him with some School Bread once we got back to Seattle. I did not end up using the recipe posted because I heard some mixed reviews, but I did find another similar recipe. School Bread is a Norwegian pastry that is often served around the holidays. It is filled with a sweet cream custard, dipped in glaze, and often coated with coconut... but the coconut can easily be omitted. They smell great while they are baking and they are so delicious when complete. It might be worth it to use all-purpose flour because the wheat can make the dough a bit tough, but I found my pastry filler to work just fine. The custard was very easy to make and tasted so good. Don't be fooled by the fact that I had a little too much fun with the custard, these pastries can easily be decorated for elegance. I'd love to make these again and even better, Ron satisfied his "school bread" snack craving. 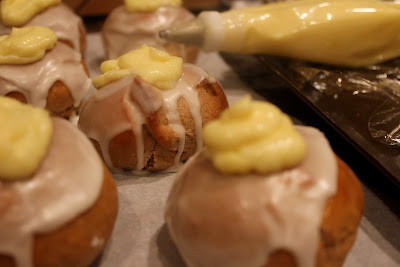