I made a pie the other day. A pumpkin pie. A cinnamon streusel pumpkin pie. Just out of the blue, for no reason other than the fact that I wanted a damn pumpkin pie. Well, I guess last Monday was National Pie Day so I was kind of inspired to bake a pie because of that. And I've also been craving a pumpkin pie since I didn't make one for the holidays this year. And ever since Ron had a bite last time and "realized what he'd been missing out on" (his words) I've wanted pumpkin pie. So, I guess there were reasons. 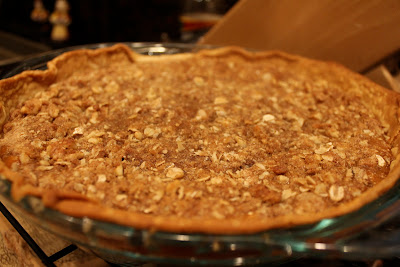 I'd mentioned in the previous post about our recent vacation-mode eating. I'm pretty sure I can pinpoint the culprit. I'm currently studying for the bar exam. In other words, I'm a total stressball. The bar exam is the test, after you receive your J.D., to become a licensed attorney. It is two days long, full of essays and tough-as-hell multiple choice questions, and tests your knowledge in various areas of the law. For the Minnesota exam, the test-takers are responsible for thirteen areas of law. I've been "studying" for about 3 weeks now. There are less than 4 weeks remaining until exam day. And, well, I had my first freak-out session the other night. It wasn't a big freak-out. I expect that they will continue to grow in duration and size. But it did involve chucking a large book across the room and swearing loudly. Ron looked at me and said "Well, I'm surprised it's lasted this long." I suppose I had been relatively calm leading up to that point. But I started on the multiple choice questions, feeling confident, and subsequently missed 50% of them. Hence, the flying book.

Now, I've heard from multiple people that this is normal. But I still sent a sanity check email to my friend Colette. She and I have similar study behaviors and habits and I knew she'd calm me down. She did. Thank you, Cole! And thank you for reassuring me that getting even 50% of these questions correct is okay. I realized that a lot of my annoyance was because I wasn't studying for myself, but for the BarBri schedule. And this simply does not work for me. I have never been a person who studied in the "traditional" sense and excelled. So now is not the time to try and do somebody else's thing. I've learned what works for me and what doesn't. So, I decided to switch gears on my study schedule and move forward with what I know works for my learning style. What does not work? Listening to offensive and annoying lecturers. What does work? Condensing the material in my own words so I can recite the entire area of tort law from memory as I walk around the neighborhood, attracting interesting looks as I audibly say things like "If a giant vat of flour falls on your head, use res ipsa loquitur because the thing speaks for itself!!" Weird. I know. But it works.

So, to combat some stress, I turned to baking. But I opted for a "light" recipe and an easy recipe that used pre-made crust (to avoid having dough meltdown). This pumpkin pie was so easy to throw together and seriously, it was the best pumpkin pie I've ever had. It was just so good. It was an interesting take on your usual pumpkin pie with the streusel on top. I enjoyed the extra crunch. We thoroughly enjoyed it. And I'll use it as my pumpkin pie recipe of choice from here on out. 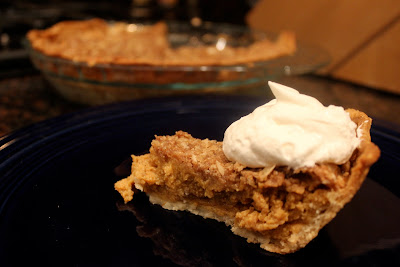