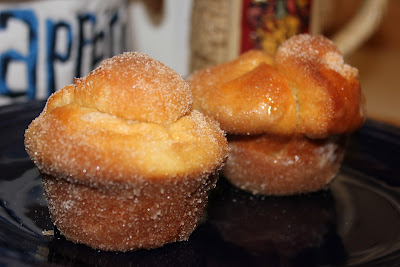 As mentioned in a previous post, Ron and I are no strangers to moving. We've moved many times during the course of our relationship. And we just finally realized that we hate moving our stuff around. That wine cooler we bought and used for our Christmas party in 2007? Yea, we haven't used it since and I don't recall it being used that night. Yet it carts around with us in it's gigantic glory just because we never got rid of it. Because we've moved so much, we've also become very careful not to buy things that will take up even more space the next time we move.

Our new house has a pretty large lawn. And shortly after we moved, I started complaining about the fact that our grass was horrendous. In Washington, it's a liability issue for a landlord to leave a lawnmower for the tenants so this was the first time Ron and I were responsible for mowing the lawn. "Please just let me buy a lawnmower, Ron." "No, Ashley. I do not want to make that investment. We have a 11-month long lease." (Oh, I guess I should mention that we're moving in less than a year. Woo hoo!! *sarcasm*) "But Ron, I love mowing the lawn. I've mowed the lawn in every single house we've ever lived." "No, Ashley."

So, I searched for landscaping and was quoted a few times at $50 per visit. Annoyed, I realized that we'd be investing hords of money just trying to keep the lawn looking decent. I searched for lawn mower rentals. Nothing. I did the whole "Ask your neighbor to borrow their mower" thing but everyone in the vicinity uses landscaping services. I was getting frustrated and the grass kept growing. Now, I know we're relatively new to this marriage thing. But Ron and I have been together for eight years. In my defense, he should know by now that if I complain about something more than five times, I'm going to find a way to do it myself. And for crying out loud, our lawn was ridiculous! It was embarassing. I couldn't find Dinah when she was outside because the grass towered over her. So I drove to Home Depot. I saw a lawn mower for $150. I bought it.

Here's where the whole "pretty big mistake" thing comes in. The lawn mower was $150. In other words, the lawnmower was cheap and had the bare basics of lawn mowing gidgits and gadgets. It was easy enough to put together but it went downhill from there. In Washington, the ground is not firm. They lawns are quite soft and the grass grows on moss. As I have never mowed a lawn in Washington before (and naturally, I did not do any research before driving to Home Depot), I did not realize that a cheap push mower would be quite difficult to push. Not to mention, our lawn was literally one foot tall. Every three feet, the mower would get jammed and stuck, turn up moss and spit out a ton of dirt. Two hours into this ordeal, Ron had already found out about the mower - no need to get into the details but it involved a desperate plea for a wrench (and a subsequent trip to Ace Hardware to buy one) - and I knew that because I had caused such drama, the damn lawn was going to get mowed one way or another. So I discovered the only way to mow the lawn. I walked backwards and pulled the mower the entire time. About 5 neighbors were out watching me. It was embarassing.

Which brings me to this recipe for Morning Buns.

Ron, too, tends to mention something once, twice, thrice... and it hangs on his mind until he does it. The past few days, our coffee trips have frequently discussed the Morning Bun that Ron should have purchased for breakfast but for some reason did not. So at some point during my 4-hour long lawn-mowing adventure, I realized that because I went against what Ron said and bought a lemon of a mower, I was going to have to do something pretty damn special to make up for it. Hence, the search for a copycat coffee shop Morning Bun recipe. I found the perfect recipe and was ready to deliver him with a delicious treat as soon as he got home that night. But in my excitement and haste, I neglected to read the recipe in full. A big Ashley no-no. You can only imagine what words were spoken when I read those words I so often see after starting a recipe unprepared - Put the dough in the refrigerator and let it rest overnight. At that point, I decided it was time to throw in the towel for the day. 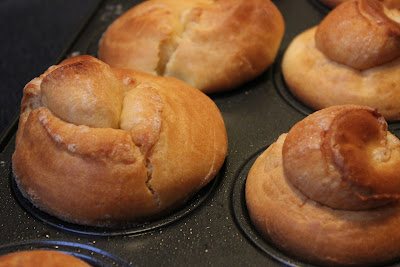 The lawn-mower situation is now far behind us and eventually these Morning Buns were finished. It is a recipe that requires waiting time but fortunately there is not a lot of hands-on time. The steps are really easy so it's definitely worth the wait. I've come to realize that for delicious breakfast pastries, rushing through the recipe or whipping up quick breads is not always best. And these Morning Buns are case in point. I was blown away by how delicious these were and will most certainly be making these buns again. The dough was more like a croissant dough and as one of Ron's co-workers exclaimed "They are better than a donut!" These buns were best right out of the oven because of the butter-cinnamon-sugar bath. However, I opted to melt small amounts of butter when needed instead of drunking the entire dozen at once. This way, Ron had his Morning Bun freshly dunked before work for a few mornings. If you're not able to eat them all at once, I'd advise doing the same because they keep better. They lasted for about 3 days kept stored in a tight container. Enjoy!
Kugelhopf Morning Buns
from the Kitchn
Yield: 12 buns
Ingredients
Kugelhopf Dough
Filling
Sugar Coating
Instructions